Playing With Heart, Not By Heart

By yevgenykutikJune 29, 2021Blog
No Comments

Several years ago, I was performing the Prokofiev G minor Violin Concerto with an orchestra in the USA. For this performance, I decided to use the score. After one of the rehearsals, a 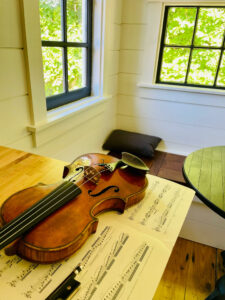 member of the orchestra approached me and told me that they loved my playing. And then they said, “get rid of the music, you don’t need it.”

Whether or not to “play by heart” riles up fellow musicians like few things do. A majority of performers are adamant that all solo works must only be performed by memory as per tradition. Others, such as Gidon Kremer and Patricia Kopatchinskaja, play everything exclusively with the music on stage. And others, such as this New York Times article points out, mix it up (i.e. Emanuel Ax playing Bach with music, while Schoenberg by memory).

Personally, I’ve found there are works I prefer to play by memory, and others for which I prefer to use a score. Coming to this realization took years of often frustrating experimentation. There are performances I regret, not because I wasn’t prepared, but because I was playing by memory simply “to adhere to tradition,” ignoring my brain’s persistent requests that it felt more comfortable with the score on stage. More importantly, it took me a number of years to finally realize that I was frequently devoting a lot of my practice time to simply memorizing rather than truly learning.

Why do we go to concerts? For me, I want to be moved and inspired, to have fun, to learn, to be awed. Whether or not the performer is playing by memory has no impact on my perception of the performance. I just want to hear an awesome concert.

It seems to me that Classical musicians have spent far too much time in our training obsessing (in an often unhealthy way) about “playing by heart.” Every competition I’ve entered strictly mandates the memorization of solo repertoire. Conservatories often require memorization of the material to pass juries, promotionals, and to qualify for internal competitions. Most of my teachers (whom I adore, for the record), never considered a piece learned unless you were able to play it by memory, in strict accordance with tradition.

Memorizing solo repertoire was the creation of Franz Liszt and Clara Schumann in the early to mid 19th century. It was a revolutionary way to add to the mystique of the solo performing pianist in the era of romanticism; the mysterious figure on stage who seems to receive guidance from the heavens. It worked. Audiences loved the theatricality, and henceforth, every solo artist felt compelled to memorize everything. Ironically, prior to Clara and Franz, you simply could not go out and play the Mozart or Beethoven Concerti by memory. It would be the height of disrespect to the composer and their new work.

This topic has been covered in great depth. And thankfully, the emerging (albeit slow) consensus is that memorization is entirely unimportant to the quality and impact of a performance.

Over the past years, I’ve also started thinking about memorization from a different perspective. We’ve learned so much about the human brain in the years since Clara and Franz. As the organist Jonathan Dimmock points out in his essay on memorization,”we can see 16 possible patterns that constitute the way our brains assimilate knowledge. Each person has only one of these, for life! Of these, the ability to memorize facts, or memorize music, ranges from second nature to nearly impossible.”

Put another way, there are a whole lot of brains out there for whom memorization is not an option. In fact, the latest educational research suggests that to demoralize someone because their brain doesn’t function in this way inhibits creativity and confidence. This does not mean however that these artists can’t be brilliant. To the contrary, perhaps your specific brain needs the visual reassurance of notes on a page in order for another part, the creative muscle, to create magic.

All this leads me to a fairly alarming realization: It is not unreasonable to assume that the conservatories, competitions, and organizations dedicated to producing the next crop of artists are only tapping into a tiny percentage of the talent in existence. What if this 150-year old plus memorization requirement (created perhaps out of boredom, in all honesty) has prevented us from hearing and getting to know Yo-Yo Ma 2.0 or perhaps genius we can’t even comprehend today?

The music industry is undergoing a reset, and it seems to me there hasn’t been a better time to break tradition than now. If your brain dictates it, drop this tradition and truly focus on playing with heart, not by heart. As a performer, decide what this means to you – memorization or sheet music be damned.