Almost everything I know about my family’s history and culture I learned by sitting at dining room tables for years on end listening to relatives share stories of what life was like in the USSR. Thanksgiving of 2017 was no different. After hours of collective story-telling, my grandmother Luba shared her memory of dropping my immediate family off at Minsk airport in 1989 to say goodbye and see us off to our new life in the west. During the mass Jewish emigration from the Soviet Union in the 1980’s, leaving the USSR meant going into the unknown with few resources and belongings. As Baba Luba recalled, when she saw me, a boy of just four, walk past the airport security gate, she thought to herself, “I will never see him again.” Luckily, the story has a happy ending. Just three years later, we welcomed my grandfather and grandmother at the Albany International Airport as they arrived to join us in the USA. 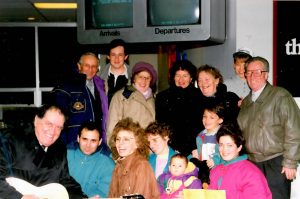 As Baba Luba told her story, she brought out a photo that was taken at the airport during the first several minutes of their arrival. The camera captured the priceless expressions of my family members, especially that of my grandfather Isaac and Baba Luba, exhausted from their journey and filled with the overwhelming emotion of seeing their family again.

In 2014 I released Music from the Suitcase, an album exploring old sheet music that my family brought with us on our journey to the USA. In those scores were extraordinary lessons about where I come from, my family, and our traditions. Seeing this photo from Albany International Airport reignited a desire of mine to put music to family memories and stories.

I asked composers I admire to choose their own family photo, a photo that conjures up memories of joy, sadness, unity, and longing, and to translate that photo into a short work for violin. What follows are eight musical meditations, written by eight different voices, each inspired by their own family story and tradition. Here are Meditations on Family.