Lessons From a Visit to Auschwitz

By yevgenykutikJanuary 8, 2021Blog
No Comments

Several years back, I was invited by international March of the Living to perform at their annual Holocaust memorial ceremony at Auschwitz-Birkenau. MOTL is an incredible educational program that brings thousands of students from around the world to Poland, to explore and see first-hand the remnants of the Nazi Holocaust. The program culminates in a “march of the living” of 20,000 people from around the world, all marching through the well-known gate and onto the field at Auschwitz II-Birkenau. 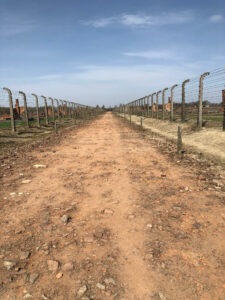 The day of the Yom Hashoah ceremony I arrived early for a rehearsal and soundcheck. With some time to spare, I walked out onto the still-empty field by myself. The first thing that struck me was the enormity of the place. It’s hard to see the end or the beginning. You can walk and walk and still feel like you aren’t getting anywhere.

I headed towards a forest on the perpendicular side of the now infamous rail tracks which were used to bring in victims and prisoners. I walked for 5 minutes, then 5 more, and then 5 more. It did not feel like I was getting any closer to the trees. I turned around, aware of the time, and as I headed back towards my colleagues, I was overcome with emotion. I was standing exactly where thousands of people walked, every day, in fear. But unlike me, they could not turn around and go back. They had to keep going, many not knowing that they were taking their last steps.

What struck me more than this vast overbearing space was the silence. This silence at Auschwitz II-Birkenau is like no other I’ve ever experienced. It is deafening. It crushes the soul, the ears, the mind. It’s enough to make one lose hope, which I know by design was the entire point of a place dedicated to hatred and death.

Like so many people in the world this week, I sat in horror watching the violent mob attack on our US Capitol and Congress. As I scrolled through posts online I saw that certain individuals photographed in the building were well-known Holocasut deniers, one even wearing a “Camp Auschwitz” hoody, and one a shirt with “6MWE” printed on it (six million wasn’t enough). There were flags flown modeled after German Nazi war flags among other national symbols of hate–I shudder to think of the noose and Confederate flags bandied about that day.

It’s no secret that hate and anti-Semitism, the very reasons my family left Belarus in 1989, have been experiencing exponential growth across the world over the past years. But to see this sentiment so openly exhibited in the halls of this venerated building in our nation’s capital, is, for lack of a better word, unbearable.

There must be something awful in someone’s life, a reason, which drives them to so openly put on such a vile garment, to wave such destructive symbols. Perhaps simply ignorance? But this is no less devastating in and of itself. How does someone get to this point? One would hope that if these individuals visited these camps and saw first hand the consequences of unchecked hatred, if they experienced this crushing silence and space solely designed to extinguish hope, they would change their mind. One would hope

I am just a musician. I’m not a political leader, influencer, or pundit. There are many bright minds currently trying to make sense of the events of this past week. However, I do know one thing: We must wake up and call this out. We need to shine a bright light upon hate, as that is the only way to impede it’s growth. If we don’t collectively speak up right now, the silence will be as soul-crushing and deafening as it is to stand at Auschwitz itself. And unlike my little 15 minute walk, turning back will be impossible.