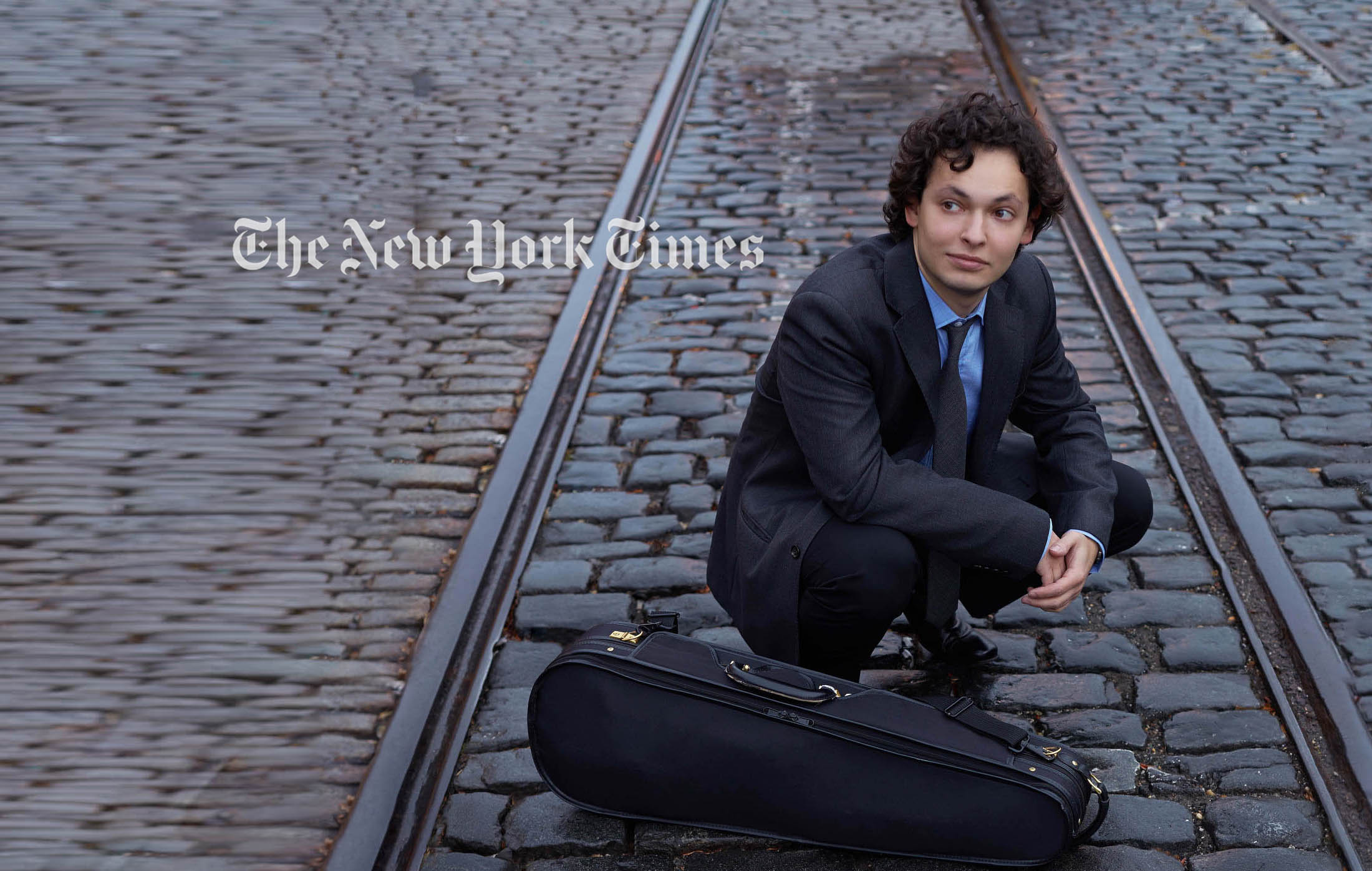 Yevgeny Kutik’s new album is “Music From the Suitcase,” inspired by violin works his mother brought from Belarus.Credit…Corey Hayes

As a boy growing up in the Berkshires, Yevgeny Kutik paid little attention to the stack of yellowing sheet music that sat on a shelf in his family’s music studio, where he practiced the violin. He had arrived as a 5-year-old in 1990 from the crumbling Soviet Union with his parents, maternal grandparents and two suitcases that were as tall as he was. In those first years, he said during a recent interview over tea, “I was more concerned with making friends, learning English, fitting in.”

Today Mr. Kutik, now 28, is a concert violinist whose schedule is studded with the standard virtuosic fare: This spring he will perform concertos by Sibelius, Tchaikovsky and Prokofiev with orchestras across the United States. But his latest recording, which will be released next month by Marquis Classics and which he presents in recital at SubCulture on Thursday, is more intimate and idiosyncratic. Called “Music From the Suitcase,” it presents a collection of Russian rarities that Mr. Kutik discovered inside those old scores on the shelf. It contains rarely performed short works for violin and piano by prominent composers like Prokofiev, Stravinsky and Khachaturian, and gems by Andrei Eshpai and Georgy Sviridov, composers whose reputations never quite penetrated the Iron Curtain.

In an age of digital downloads, his project is also a reminder of the sometimes unpredictable power of physical objects to transport and preserve culture. But, above all for Mr. Kutik, the sheet music his parents brought over “is the physical embodiment of our family and our journey,” he said, adding, “It reminds me of what we went through and how far we have come.”

>Mr. Kutik was born into a musical Jewish family in Minsk, Belarus. His father, Alexander, was assistant principal trumpeter in the Belarussian State Philharmonic; his mother, Alla Zernitskaya, initially taught violin at a school for musically gifted children. In a phone interview, Ms. Zernitskaya recalled a succession of anti-Semitic incidents that drove her to consider emigration. Two months into her job, she said, “I was called to the principal’s office, and she said, ‘I have to ask you to leave.’ She was very straightforward: she said, ‘We took three Jews to work this year and we have exceeded our quota.’ ”

When Ms. Zernitskaya appealed to the minister of culture, he glanced at her passport, which identified her as a Jew. “He said, ‘They were absolutely right, you have your own country, find employment there,’ ” Ms. Zernitskaya said. Not long after, she overheard a woman in Yevgeny’s day care center hurl an ethnic slur at him; his older brother, meanwhile, began to parrot anti-Semitic prejudices he had picked up in school. Ms. Zernitskaya vowed to leave.

The family of six was allowed to take $90 per person and two suitcases, which Ms. Zernitskaya purchased on a special trip to Moscow. Unsure of where they would end up — the family members would spend six months in transit in Italy waiting for the green light from a sponsor — Ms. Zernitskaya said she received a barrage of advice on what to pack: “Friends were saying, take any groceries like salami and cheeses that can keep. And a big bag of pillows and blankets. So you are standing in front of your house and you are thinking, what can you put in those suitcases?”

Mr. Kutik recalled, “They had to pack our most treasured possessions, whatever we wanted to remember from our life.”

Yevgeny Kutik, who is touring to promote his new album.Credit…Corey Hayes

Ms. Zernitskaya was forced to leave her violin behind — it was valuable and therefore deemed public property — and relatives told her she would never be able to find work as a musician, anyway. Nevertheless, she decided to pack a stack of anthologies of short works for violin that she had used in her teaching. She owned more important editions of concertos with bowings and fingerings by famous Russian violinists like David Oistrakh, but she had a hunch she might be able to find those in the West.

The scores she crammed into the suitcase contained Russian miniatures that were virtually never recorded, even in the Soviet Union: Eshpai’s Rhapsody “Hungarian Tunes”; a waltz from Prokofiev’s “Cinderella”; a Nocturne from the “Masquerade Suite,” by Khachaturian; leaves from “Children’s Album,” by Sviridov. “I thought, I have two children, and maybe they can play these one day,” she said.

Her husband and parents thought it foolish to waste precious space in the suitcase for sheet music. “Actually, I had a lot of arguments with my mother,” Ms. Zernitskaya recalled. “She was saying, all the people are saying, we are going to be hungry there. We shouldn’t take anything we can’t sell there.”

When Mr. Kutik became a performing artist, his mother nudged him to look at the sheet music, which was, by then, beginning to fall apart — but which, unlike the Moscow suitcases, survived her recent move to a new home in Lenox, Mass.

“I kept on saying, ‘Just look at those pieces, they are like candy,’ ” Ms. Zernitskaya said with a laugh. (Contrary to all the predictions when she left Minsk, she has been teaching music in two public schools in Pittsfield, Mass., for over 20 years. She was reunited with her violin when her parents-in-law came to the United States.)

“I was finally interested in enough to say, hey, that’s pretty cool,” Mr. Kutik said. “Those scores arrived with us, and look how old and special and fragile they are.”

His first CD, “Sounds of Defiance,” had featured monumental and technically dense sonatas by Shostakovich and Schnittke. “These are very tough pieces both for the performer and the audience,” he said, noting that many Russian cultural masterpieces, in literature and in music, are on a panoramic “War and Peace” scale. “I looked through these books and found these pieces that were four, five minutes long and yet were every bit as compelling. Many have to do with Russian folklore or literature, and even the abstract pieces tell a very concise story.”

On the recording, Mr. Kutik retells these stories with his dark-hued tone and razor-sharp technique, bringing out the zesty playfulness of Eshpai, the melodic genius of Prokofiev, or the cadenza-like virtuosity of an arrangement of Tchaikovsky’s “Russian Dance” from “Swan Lake.” There is also the deeply emotional “Oyfn Pripetchik,” a Yiddish song by M. M. Warshawsky that Mr. Kutik encountered during a trip to Poland two years ago in which he visited Auschwitz and other sites of Nazi atrocities.

That track “is perhaps the most personal for me,” he notes, adding, “It’s the one that I brought back in my own suitcase.”

Yevgeny Kutik performs selections from “Music From the Suitcase” on Thursday at SubCulture, 45 Bleecker Street, East Village; subculturenewyork.com. On Saturday and Sunday, he performs the Sibelius Violin Concerto with the Greenville Symphony Orchestra at the Peace Center in Greenville, S.C.; yevgenykutik.com.