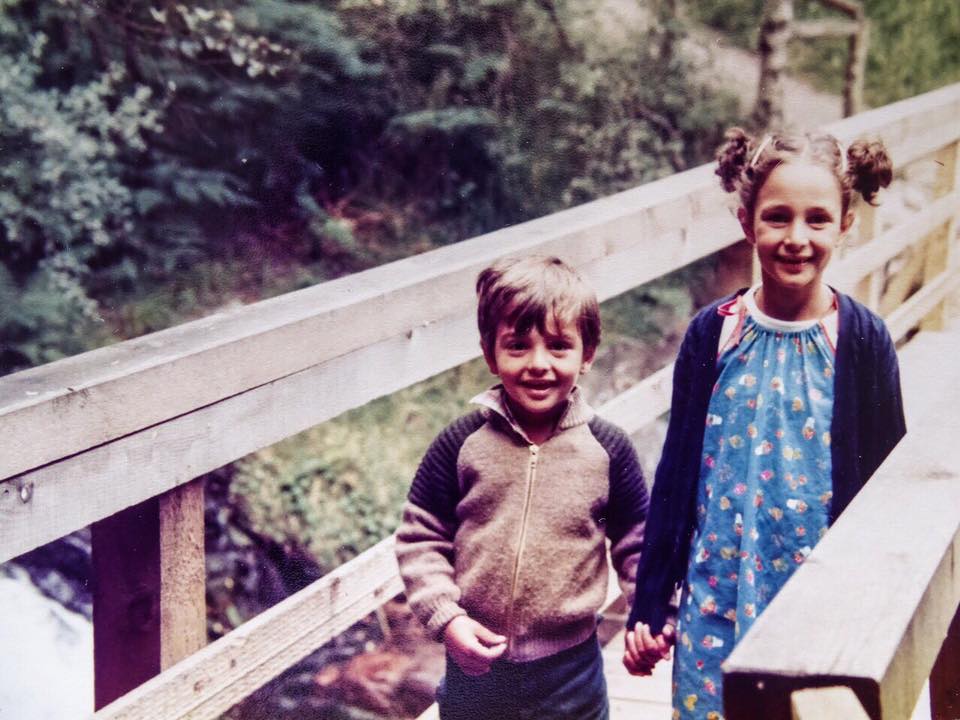 When violinist Yevgeny Kutik commissioned me to write a piece inspired by a family photo I immediately thought of this one which I believe was taken during a family trip to  Bulgaria back in 1979.

This is my sister Rima and I crossing a bridge while holding hands. There is no historic event associated with this photo. Its significance to me is that it captures a profound moment of contentment during which two happy siblings are simply smiling at the camera. This short piece of music that I have composed tries to depict the same serene simplicity, another short frame in time where the clarinet and the violin play along each other. There is no drama in this composition, all I wanted for these simple melodies was to unfold effortlessly with lots of love, similar to how my sister Rima held my hand across that bridge.

Kinan Azmeh has been hailed as a “Virtuoso” and “Intensely Soulful” by the New York Times  and “Spellbinding” and “Brilliant” by the New Yorker, and “Incredibly Rich Sound” by the CBC.  His utterly distinctive sound across different musical genres has gained him international recognition as clarinetist and composer. Kinan was recently named composer-in-residence with Classical Movements for the 2017-2018 season.

He has appeared as soloist with the New York Philharmonic, the Seattle Symphony, the Bavarian Radio Orchestra,  the West-Eastern Divan Orchestra and the Syrian Symphony Orchestra among others.; and has shared the stage with Yo-Yo Ma, Marcel Khalife, Aynur, Daniel Barenboim, John McLaughlin and Jivan Gasparian.

His compositions include several works for solo, orchestra, and chamber music; film, live illustration, and electronics. He leads his both his Arabic/Jazz quartet the Kinan Azmeh CityBand and his Hewar Ensemble and  serves as artistic director of the Damascus Festival Chamber Players, a pan-Arab ensemble dedicated to contemporary music form the Arab world. He is also a member of Yo-Yo Ma’s Silk Road Ensemble with whom he was awarded a Grammy in 2017.

Kinan is a graduate of New York’s Juilliard school as a student of Charles Neidich, and of both the Damascus High institute of Music where he studied with Shukry Sahwki, Nicolay Viovanof and Anatoly Moratof, and Damascus University’s School of Electrical Engineering.  Kinan earned his doctorate degree in music from the City University of New York in 2013.